"My photos and info are free. If you purchased them, you got scammed."
"Not for redistribution or resale. Hyperlinking from Pinterest or other such share sites is prohibited. Not to be used for your book or other material you sell or give away."

Overlook on the way to Cheaha. 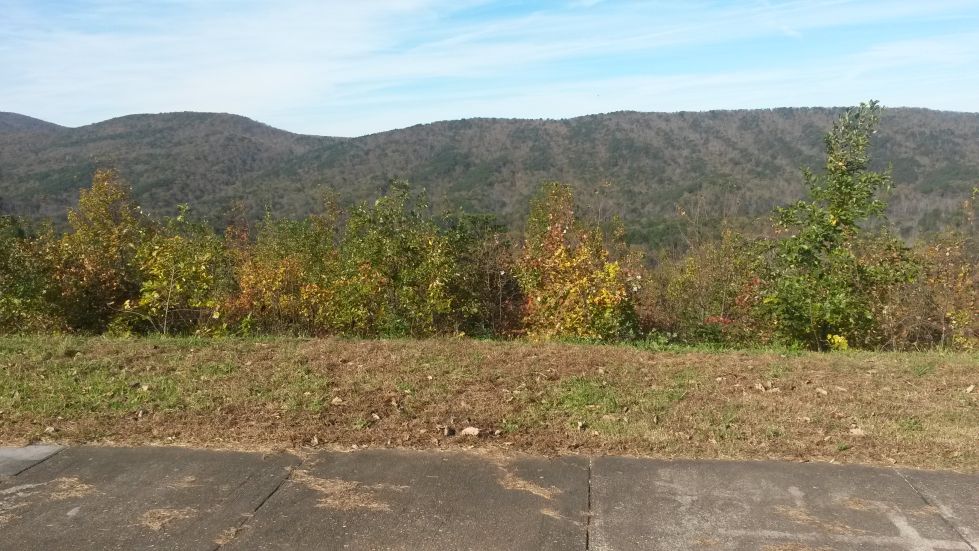 I got there about 9:30 in the morning on Nov 13. Evidently they don’t track who is in which semi-primitive camp site, although I did see a place for it on the wall behind the cash registers.

I drove the loop, one-way, but some people ignore that I guess they have good insurance. Signs say one way and 10 MPH… they were disregarded by about one-third of the people who used the road that Friday. 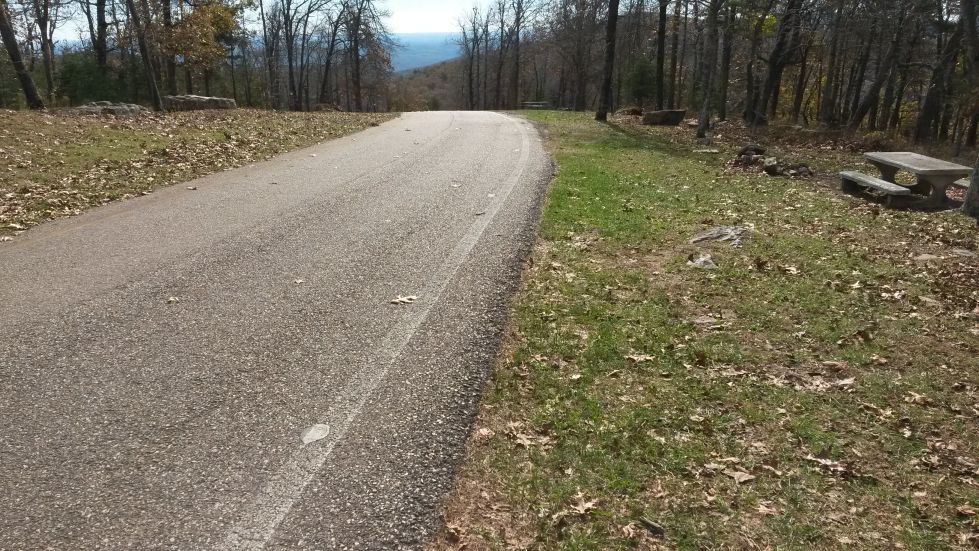 The semi-primitive campsites are numbered 102 through 126. I may have missed some. The pavilian on the CCC tower road is where the restrooms are located.

I drove down to one. Mistake, I walked down to the store and told them the number and then walked back up. I did find out my boots aren’t designed to handle walking down hill. I also found out I am very seriously out of shape. I would say… at a guess, 1000-1500 feet back up to my car and I had a tough time of it. Wheezed part of the way. Most of the way. I had to stop several times.

Placed a tarp after clearing the area under where I was going to place it of rocks and tree pieces. Set my tent up. Wind was calm to about 5 mph. A few ravens flew over to a nearby tree apparenly to see if I had any food out where they could get it. Blew up the air mattress with a small inflate motor I had brought. 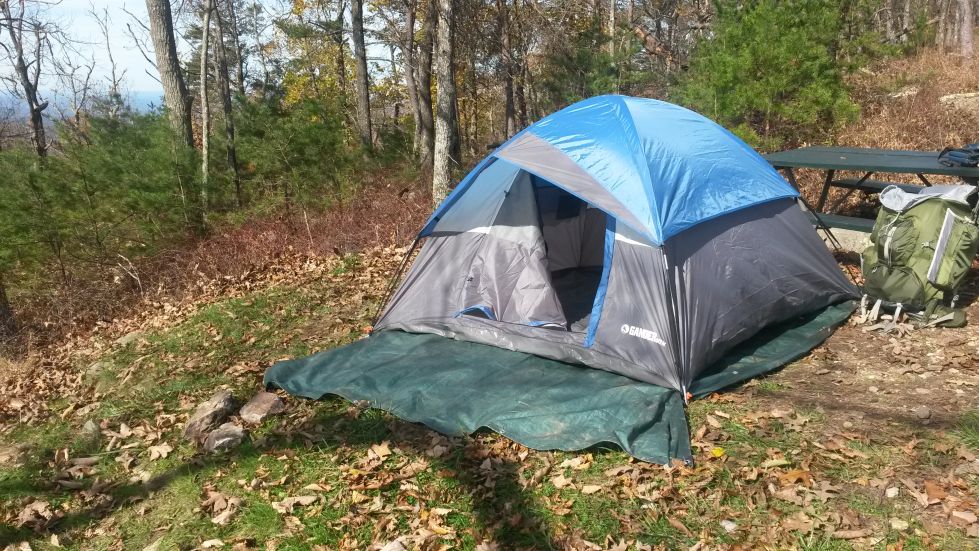 A few leaves were blowing about here and there. Not many people there in the morning. It was nice and quiet. I heard one or two jet passenger planes fly over way up.

As I sat there, about 10:00 AM, I heard a tractor coming down the road. It was pulling a trailer. On the trailer was a machine. A leaf blower. He was blowing leaves off the one-way road and the wind was blowing more leaves onto the road behind him. He waved and I waved.

I got out my MSR Whisperlite stove and heated some water. Ate a nice meal of MH chili mac with beef. The firepit provided by the park worked just fine as a wind break. My water boiler/cooker was too narrow for the MSR stove legs so I bought a Sterno stove/windscreen. It works fine as you can see in these photos. 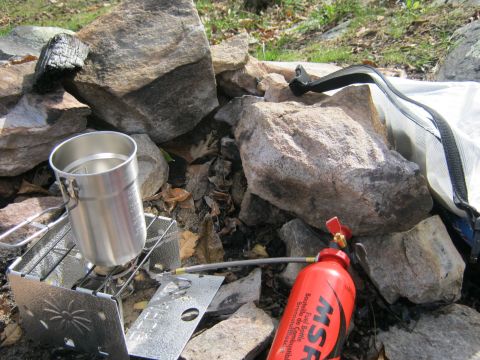 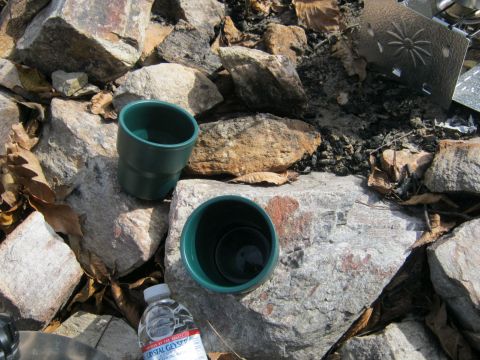 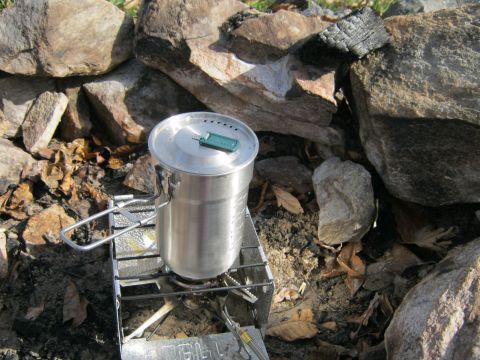 Had to go to the restroom about noon. My body rebelled most of the way up the approximately 500 feet. Walking back down to my tent was easy. Car camping, I probably should have taken a porta-potty of some sort, depends…

Here are several views of the pavillion. 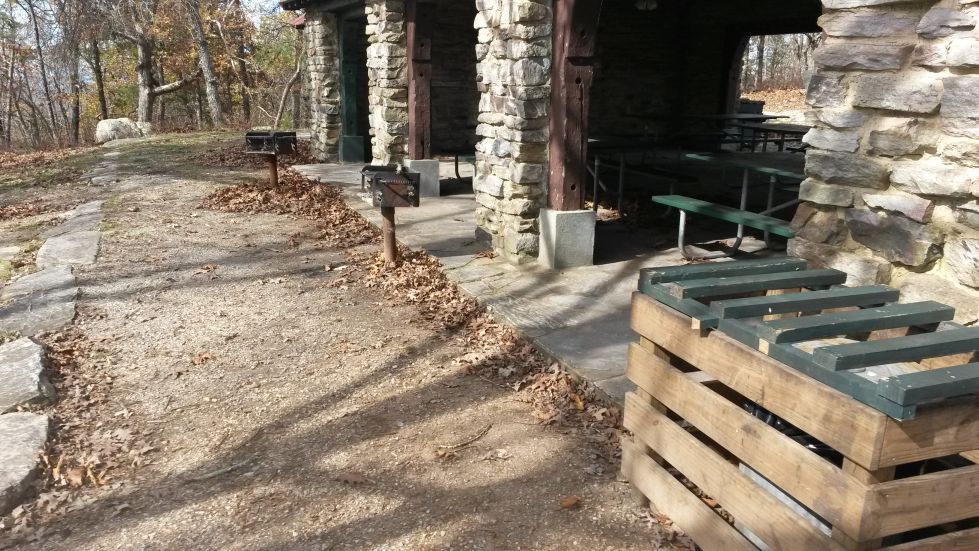 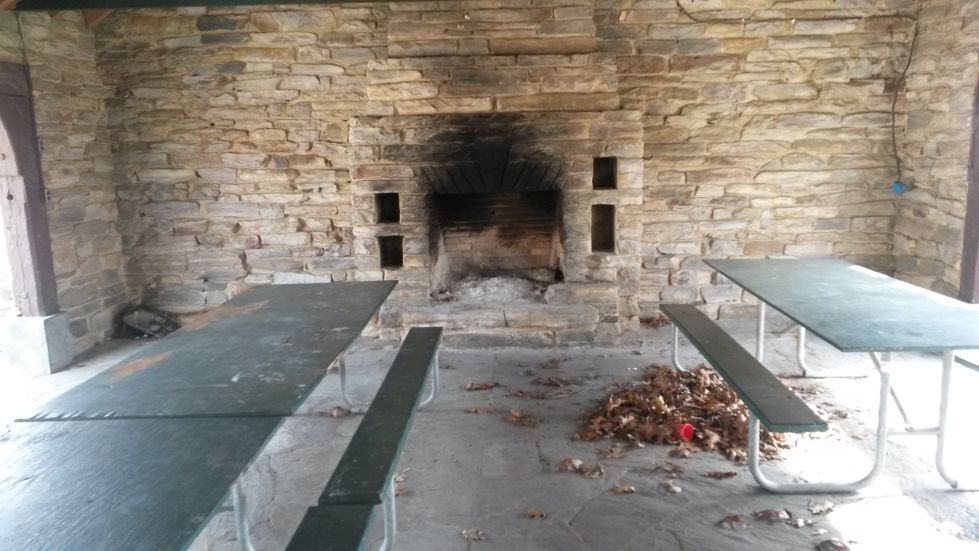 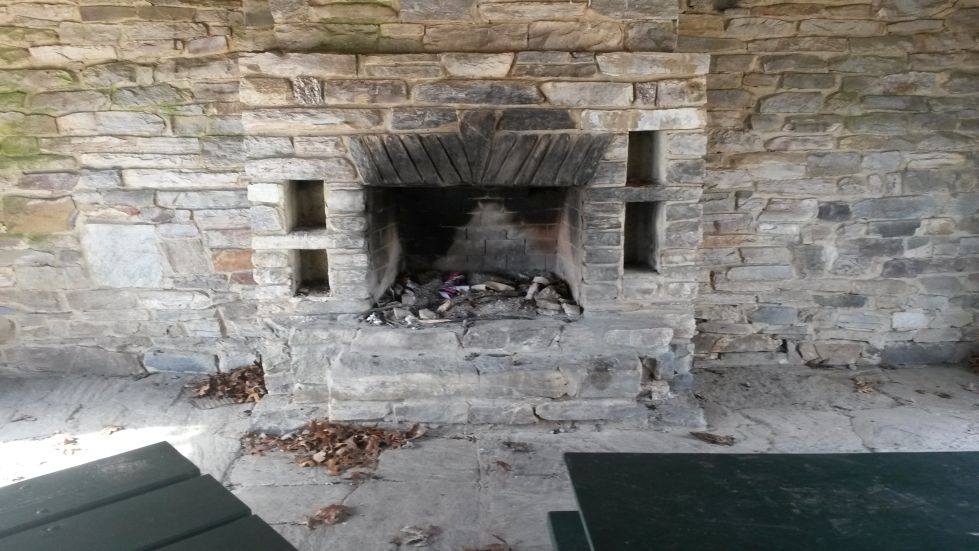 The sky was clear of thick clouds, mostly high thin ones. A few contrails. All slowly moving southeast as the cool front approached.

The fresh air was great. 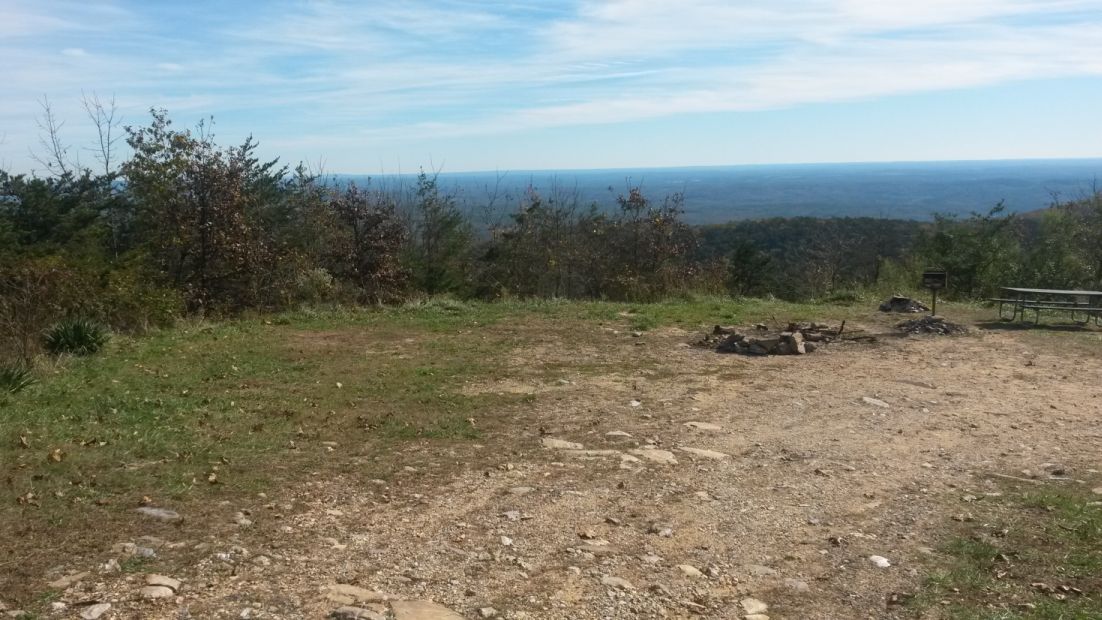 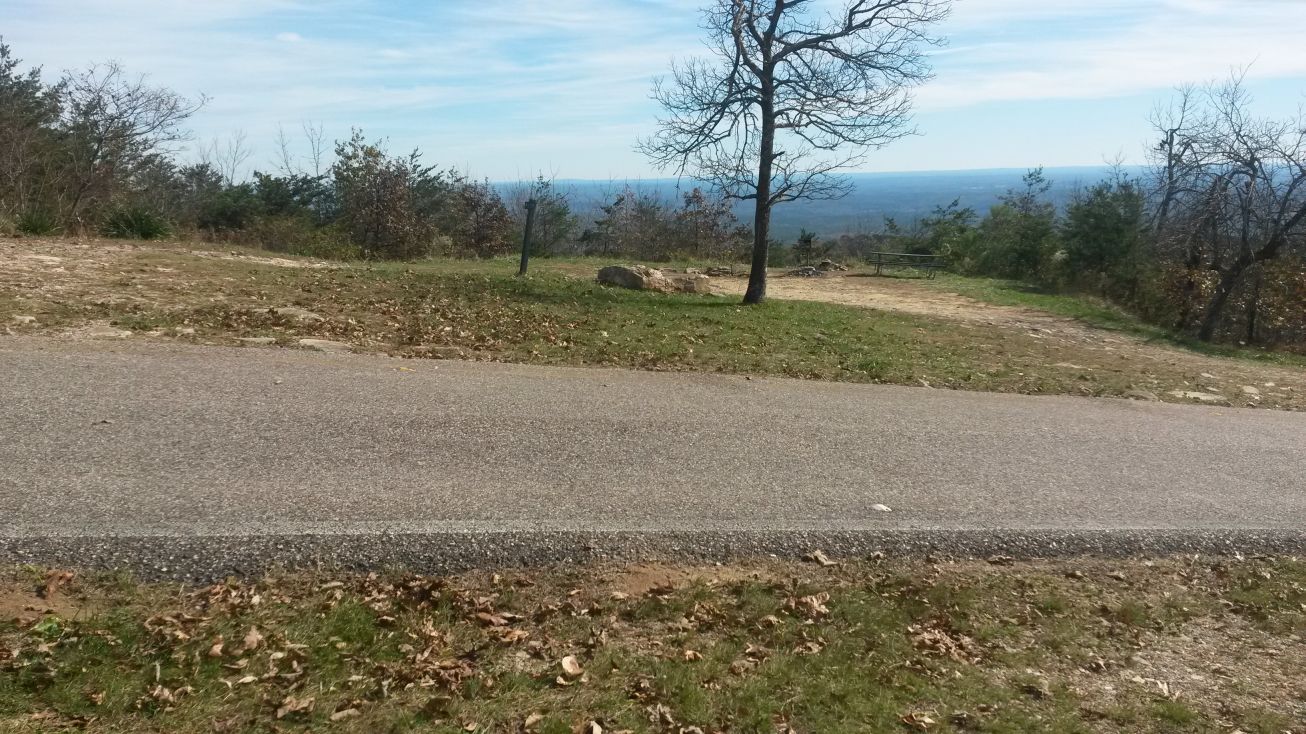 Around 2 PM other campers started showing up. Another group around 5-7 PM. Since they came in after dark, a pickup truck of park employees came by and accepted payment.

I had received two placards when I paid. One on dash of my car and one on a clip under the campsite number.

Here is a photo of one of the water spigots. It was like a water well, water didn’t flow right away. It had to come up a pipe then it flowed out. 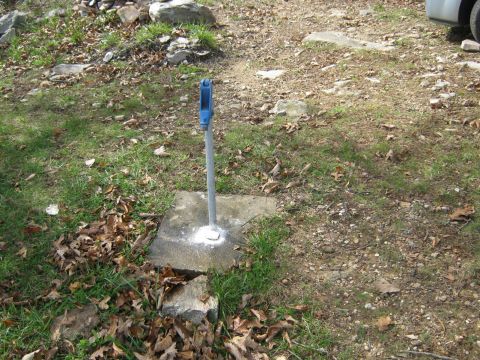 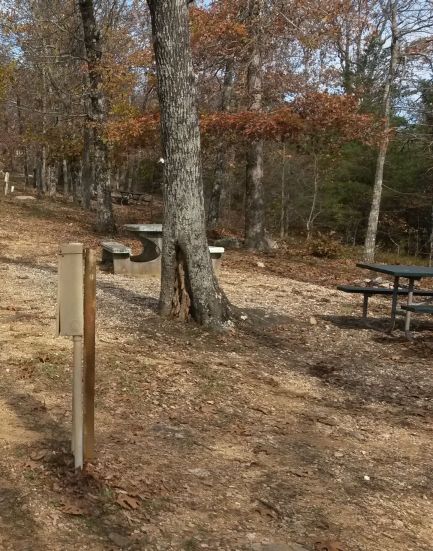 Trashcans in a wood frame to keep the forest critters out of the cans. 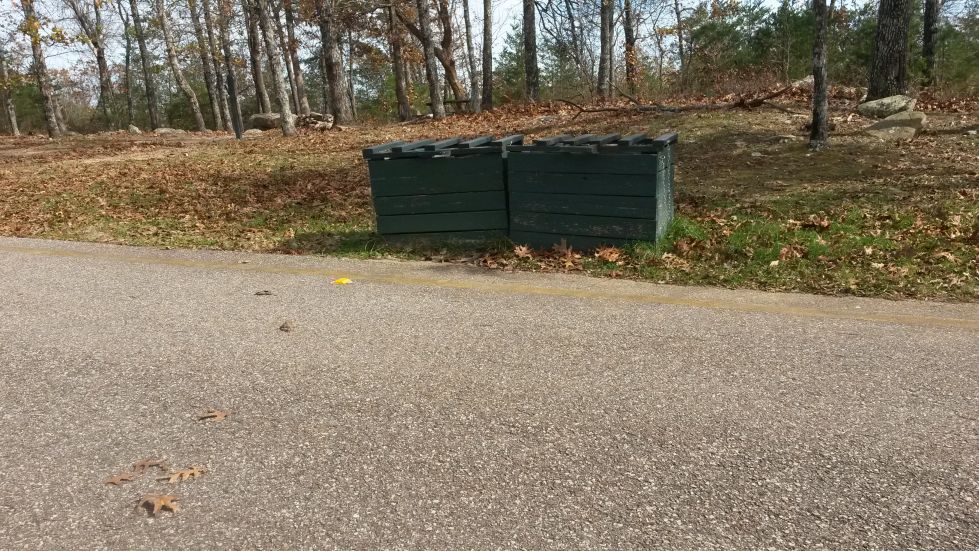 After taking about 25 photos, I noticed my cell phone was low on battery so I hooked it up to my InstaBoost and recharged it.

After sunset around 4:30 PM, I heated water again. I used my headlamp to check my cooking and pour hot water into the MH Beef stew single serve pouches. Spilled some water on my left hand, but it wasn’t hot enough to leave a mark or turn my skin red. I was lucky.

I put my sleeping bag on top of the air mattress, and put a blanket on top of that. I slept warm. I only took off my socks. Leaving on cotton boxers, cotton jeans, a polyester long sleeve shirt, and a hiking shirt. Put on Thinsulate gloves and a knit cap.

I slept with the sleeping bag partially unzipped, with the blanket on top. The knit cap at an angle on my head to cover the side of my face and not on my lower ear. More confortable that way. The gloves were in case I moved my hands outside the quilt while I was asleep, they would stay warm that way.

Throughout the night a cell phone tower aircraft warning lights on another hill blinked every few seconds. At first I thought it was a campfire left burning in spite of the wind and they should have put it out. Then I realized it was warning lights. They didn’t keep me awake, but did wake me up a few times.

I woke just before dawn. I noticed a number of cars, pickups, and SUVs leaving.

My cell phone finally connected. It was 31F in Delta, AL. About 1200 feet below me. I had forgotten a digital thermometer at home, so I don’t know what the temperature was at the campsite.

I decided to leave Saturday morning after the wind had lifted out a 12 inch long tent peg during the night. I was dealing with the cold. But the 7 trips uphill to the restroom, and feeling like I physically wasn’t going to make it, decided it for me. I needed to exercise more before being out in the woods again.

Some of the decidious trees still had their orange and red leaves. Most had shed them.

I saw a squirrel at another campsite, but couldn’t get a photo before he noticed me and left.

By 7 AM, most of the people in the semi-primitive campsites had left. I decided to leave to. Not to join the maddening crowd, but I just felt defeated. I hadn’t felt that way on a camping trip in many years.

I knew I would go back there. I had miles to go before I slept.

Commenting is closed for this article.

Privacy policy: I track IP addresses and pages looked at out of a vague curiosity to learn what pages are looked at on my site. After a set period, this information is deleted. Nothing is permanently kept.